Serial Number 9, affectionally known to the Nerdle as Eileen Dover, was a Starship prototype currently being tested in Boca Chica, Texas. SN9 followed on from SN8 as the second Starship prototype to be fully assembled with nosecone and three Raptors, but unlike SN8 it was completely assembled at the build site, bar one Raptor engine. SN9 was also the first Starship to be fully constructed from 304L Stainless Steel.[1] SN9 performed a similar medium-altitude hop as SN8, but at a reduced apogee of approximately 10km. SN9 utilises Helium to pressurise the Fuel header tank,[2] a measure intended to resolve the issue that lead to SN8's fiery end, but despite this measure SN9 met a similar fate.

Construction of SN9 began in the summer of 2020, with the first parts being spotted on the August 15.[3] The assembly of the major sections continued into September, with the tank section starting to be assembled on the September 15.[4] By the October 3, the tank section had been fully stacked in the Mid Bay.[5]

The tank section was transferred to the newly-constructed High Bay at the end of October,[6] before the flings were fitted on November 2.[7] After a short journey outside on November 15[8] to test SN9's legs and the recently-assembled megatransporter, SN9 returned to the high bay for the attachment of the nosecone section on November 25.[9]

Shortly after 9 AM on December 11, SN9 tipped inside the high bay.[10] Bluto was rapidly mobilised[11] to support SN9, being the only crane available with the required lifting capacity, and successfully supported the righting of SN9 two days later.[12] The contact with the high bay wall as a result of the tip caused damage to the right-hand flamp and fling,[13] requiring their replacement. The tip also lead to the adoption by the Nerdle community of the nickname "Eileen Dover" to reference the mishap. The incident appears to have involved damage to the stand supporting SN9,[14] but the exact failure mode is unclear.

SN9 was noted as having two Raptors fitted on December 10 during a site visit by Elon Musk and Steve Jurvetson.[15] The missing third engine may have been removed and transferred to SN8 following issues during static fire testing of that vehicle. The final engine, Raptor SN49, was fitted at the pad on December 23 as an early Christmas gift.[16]

SN9 was rolled out to the pad on December 22 and lifted onto Test Stand 2.[17] This marks the first operational use of Test Stand 2, after a short use by SN7.1 prior to its own burst test.

On January 04 2021, another ambient temperature pressure test was conducted, possibly to test the new Helium presurisation system for the header tank. This was followed by a static fire on January 06, however it is believed that this static fire was aborted mid-firing and that a second test is necessary. A further static fire attempt on January 08 did not appear to involve significant loading of propellant onto the vehicle, and was reportedly aborted due to a potential range violation. Some work on the Ground Support Equipment was observed to take place following this static fire.

The next Static Fire attempt on January 12 was aborted late into the countdown following the warning siren. The following day, January 13, three successive static fires occured with no outwardly-apparent issues.[20] Elon later tweeted[21] that two Raptors need slight repairs and will be exchanged. The first, Raptor SN44,[22] was removed on January 15 and replaced later that evening. The second Raptor, later revealed to be SN46,[23] was removed overnight and replaced on January 16.

On January 28, SpaceX proceeded with launch preparations, evacuating Boca Chica and running through the countdown to Engine Chill. However, the launch attempt was aborted due to a lack of FAA approval for the test flight relating to "outstanding safety issues".[26] Flight approval was finally given late on February 1.

SN9 lifted off on its test flight on February 2 2021, successfully climbing to an apogee of 10km and transitioning to header tanks before engine cut-off for the bellyflop descent portion of the flight. However, SN9 experienced similar trouble with the landing burn as SN8, with only one engine successfully relighting. With insufficient thrust, SN9 was unable to correctly orient itself for landing and experienced a Rapid Unplanned Disassembly on contact with the ground. 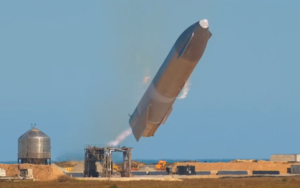