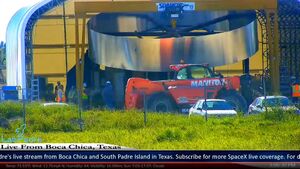 Mk3 ring #4 is moved out of the IMCAR machine

The Starship, and eventually Super Heavy, are constructed of stacks of stainless steel rings.[1] These stacks are welded together to form the body of the ship which also act as the walls to the fuel tank. These rings have been created in varying fashions from Starhopper to current day. The most recent rings being created are single-weld rings using an IMCAR Vertical Steel Rolling Machine. It is believed robotic horizontal welds will be used for SN1 but it has not yet been confirmed. 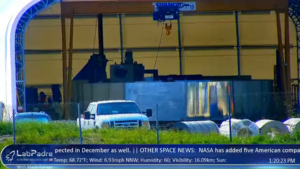 Mark 1's rings were a patchwork of bent steel plates and were hand welded into a ring shape. It had 16 rings making up the lower half that housed the tanks which would have powered the rocket engines. The upper area had 5 rings making up the lower half of the nose cone section and would have housed the avionics for the test flight. However after the top bulkhead of the upper tank was launched 200ft during a pressure test of Mk1's lower section, this section (named Rolo) was dismantled and the upper section of Mk1 (Nosey) sits on a concrete pedestal in front of the Onion tent to this day.

Mark 2 followed similar design principles to Mark 1 and was partially assembled at the Florida Cocoa site, before this site's projects were abandoned.

Mark 3 (or SN 1) rings are created on the IMCAR, where a sheet of steel is bent into a ring shape and a single vertical weld joins the two ends. Mk 3 rings have a larger width that Mk1 and Mk2 rings did and a generally smoother appearance.

Spiral welding will not be used per Elon:

"Spiral-winding is great for uniform thickness. We used that for the Hyperloop vacuum tunnel. However, Starship skin thickness will vary considerably according to loads." [2]