Assembled on site at Boca Chica Spacex facility Summer/Fall 2019 for Starship presentation although the insides were still incomplete. Work continued 24/7 on the two halves. Orby ring sections were assembled by welding together bent steel panels in a patchwork design. It was fully assembled for the Starship presentation. Afterwards, the lower part "Rolo" was moved to a test stand at the launchsite, and the upper nosecone part "Nosey" located in the shipyard. 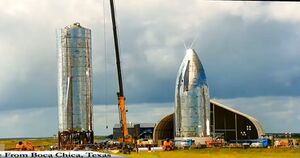 Starship Mk1 upper (nosecone) and lower sections next to eachother on Oct. 5, 2019 from Lab Padre feed. All credit to Lab Padre.

Rolo was damaged during pressure testing of tanks on Nov. 21, 2019. The resulting explosion launched the upper bulkhead about 150m into the air, with it landing in the road outside the SpaceX site. Rolo was dismantled in sections and removed from the launch stand.

Work on Nosey briefly resumed on Dec. 12 possibly in preparation for its dismantling as well, although previously some hoped it would be moved to the Boca Chica Rocket Garden. It currently stands on a concrete pillar in front of the Onion tent, partly blocking the view of work being done inside, when the door is open.